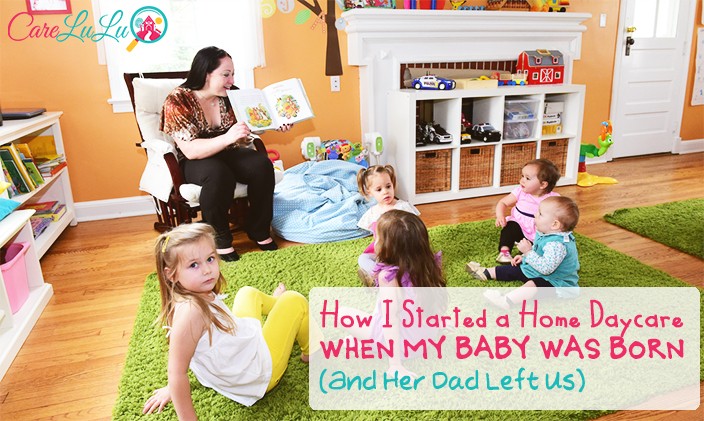 CareLuLu All posts from CareLuLu
0

Tagged with in-home child care, in-home daycare, starting a daycare
Spread the love
My daughter was only 2 days old when her father left us. I was totally alone. My entire extended family lives outside of the United States and I wasn’t sure of my options. It was quite frightening.

However, I was hopeful at first. I was sure that there would be help out there for someone in my position. When I went to social services to look into my options, I was surprised that there was so little that they could offer me. They said that I was perfectly capable of working and that I could enroll my daughter in a daycare for low-income families. I decided to tour some of those daycares but did not find any that were a good fit for my newborn. It was then that I realized that I had to come up with a plan. I decided to start my own in-home child care program.

I took everything out of my 401K, paid taxes and rented a house. I decided that by running my own in-home daycare, my daughter and I could be together while I worked and I could made a living for the two of us. It was a big leap of faith but I felt that it was the right thing to do. I calculated that I had about 6 to 8 months’ worth of savings which should give me plenty of time to get my daycare licensed and up and running.

To my great disappointment, that was not the case. By the time my daughter was 6 months old, I had submitted all of paperwork, crossed every “t” and dotted every “i.” I received an e-mail saying that I would have my license in 30 days. I was very excited, of course. I was almost there! I was merely waiting for the papers to arrive. However, when 30 days had passed and no license had arrived, I called my license inspector only to be told that one of my forms had become out of date during the lengthy submission process. I would need to wait another 30 days. I wasn’t sure I could make it another 30 days and, what if this same thing happened again after another month of waiting?

I was devastated and felt more alone than ever. Again, I decided I needed to pick myself up by my bootstraps and figure something out. This is when I learned the importance of never taking “no” for an answer and asserting myself. I called my state representative’s office and explained my whole situation. They promised that they would call me within 2 days. They did. And so did the child care licensing agency. My license was on its way. And, as they say, the rest is history…

The greatest lesson that I have learned from becoming the owner of an in-home daycare is that, as a small business owner, I must advocate for myself and refuse to take “no” for an answer. I also must be willing to take risks and have courage that things will work out.

I hope that my story can be of help to those feeling overwhelmed and frustrated by the child care licensing process. If I could do it, as a single mom with no help, then anyone can do it. Running a child care program, including a home daycare, is a business and if you want to run a successful business, you must be willing to take risks and be assertive. I took a risk when I decided to start my daycare and that risk has paid off. I stood up for myself by calling my state representative and, because of my refusal to give up, I now have a thriving business, a healthy daughter and a prosperous life!

Owner of Art and Language Studio

Find Daycare and Preschool Programs Near You